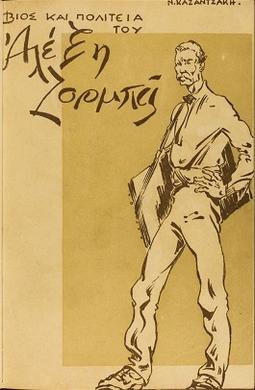 At the start of my book and audiobook reviews, I typically explain what motivated my choice. For Nikos Kazantzakis’ 1946 novel, inspiration came from a boyhood enjoyment of instrumental music. I liked all kinds of popular music back in the day, but songs with a lively beat and no singing were a particular joy. Without the interpretation implied by lyrics, I was free to relate to the music however I pleased. This lead to a fondness for Sousa marches, and for contemporary artists like Herb Alpert. I loved Alpert’s trumpet, and his version of the theme song from the 1964 film based on Kazantzakis’ novel was a particular pleasure, so much so that I knew I’d have to read the book someday. Nearly half a century later, I finally purchsed the audiobook. I prefer to be more impressed by the enduring power of youthful passions than dismayed at the amount of time I spent watching ball games or bad movies instead. Fortunately, lengthy anticipation did not this time lead to disappointment. The relationship between the novel’s first-person narrator and titular character could easily have descended into any number of binary cliches — man of mind/man of body, curiosity/appetite, urban/rural — both characters come alive as distinctive personalities, and their bond takes them to some genuinely unexpected places and inspires philosophical insights from both of them. George Guidall’s performance on the audiobook was solid enough to make two weeks of car trips enjoyable. Unfortunately, the experience wasn’t entirely satisfying. It didn’t take long for me to realize this was a work that needed to be studied, yet by their nature audiobooks don’t lend themselves well to analysis, unless you hit rewind frequently and use a voice recorder for taking notes. There was little opportunity to investigate some of the historical and cultural references, or analyze challenging passages. One scene in which a female character perishes in a horrific fashion left me very uneasy, but there was no opportunity to investigate that moment. As much as I enjoyed the audiobook, I know I didn’t catch all the novel’s complexities; the kid who enjoyed Herb Alpert’s rapid-fire notes feels a little cheated, so maybe next time I’m on vacation I’ll get the full experience of reading the darn thing.