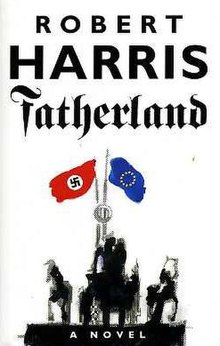 I’ve been fascinated lately with novels that explore alternative histories of the 1930s and 40s. I’ve read about America being overtaken by populist tyrant , electing a Nazi sympathizer, and losing the Second World War and being occupied by the German Reich. Robert Harris’ 1992 novel is the first I’ve read where America hasn’t been the focus, and it provides the most realistic vision of what could have happened in this turbulent era of world history.

For reasons that aren’t altogether clear, Germany is able to capture both Moscow and London in this world. This gives the Nazis control of most of Europe, which is where they stop their expansion. There is no change in the Pacific war, as America defeats Japan with atomic weapons. By 1964, the year in which the novel takes place, Germany and the United States have been in an extended Cold War, similar to what actually occurred between the USA and USSR in our reality.

While the scenario leaves a lot of obvious questions unanswered (how did the Nazis discover the British had deciphered their encoded messages? why did the Russian forces collapse?), this parallel world does seem authentic. Hitler’s ambitions were Euro-centric, and launching an attack across the Atlantic would have left him vulnerable at home. Had Britain fallen, America would have no base to launch an invasion of Europe, and would have focused attention to the war in the Pacific. An extended Nazi regime makes Europe a much different world in this era, while America remains relatively unchanged; not an ideal situation by any standard, but one that seems altogether plausible.

But Fatherland isn’t an alternative history text. It’s a detective story focused on two principal characters, a German police officer with no great love for National Socialism and an American diplomat. They team up to investigate the murder of a Nazi official, and as they dig deeper they discover that the unconfirmed rumors about the fate of Germany’s Jews turn out to be very much true. The pace is steady, the characters engaging, and its conclusion leaves you satisfied yet curious to know what happens next — a rare and pleasing feat.

Of all the alternative histories I’ve read so far, this has been the most satisfying. The audiobook performance by Michael Jayston wasn’t memorable, but didn’t detract from the writing, which is really all you want from a reading.