The cover to the first issue of “Tales of the Zombie,” a black-and-white comic magazine from the 1970s

Like a sham election in a calcified dictatorship —
The people’s candidate has won an unprecedented thirty-second term! —
literature’s greatest writers each year are canonized, anthologized, solemnized,
and for the majority of undergraduates who come from families with sufficient means,
somnambulized.

Graduates wishing to spend more of their parents’ money,
or who don’t mind working for pennies,
or just want to avoid having to begin a career in a mindless profession,
can choose to enter the rooms where the sham election’s ballots are tabulated.

Some advance so far as to believe the votes they cast
can actually determine the election’s outcome
not realizing until they have submitted their ballot
that the selection is merely among clones.

THE GREAT WRITERS shuffle along the halls of academia,
the corpses of their copious corpora animated in required readings,
essay assignments, dissertations, books from the university press,
and collected editions, both printed and online.

I respect the accomplishment of my prodigious literary ancestors
but have lost my desire to join in the worship of their zombie lives.

The thing you find worthy

I find worth in

The effort
The journey
Laughing at the failed experiment 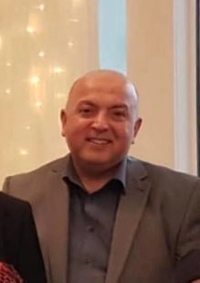 He smiled like someone who would welcome me into his home.
We were also about the same age.

I know little about him, not even his name really —
Is the J silent?
Would he have pronounced the first letter of his last name with a glottal fricative?
Our first meeting would have been awkward:
Hi, nice to meet you…
and if he hadn’t picked up on my hesitation, I’d have opted for the silent consonant —
Is it, Am – ad?
I like to imagine him laughing at my clumsy greeting.

If I were really curious, I’d consult the WWW and discover the WWWWHW of his life:
Who was in his family,
What he did for a living,
Where he went to college,
When he joined his mosque,
How he was being remembered.

Why he was there last Friday

I’d rather not know these things.
Such knowledge would only bring the horror closer.

But I did hold his picture in one hand the other day,
an electric tea light in the other,
and along with a few hundred people in my home town
said a prayer in three religions united in one voice on a bracing cold day half a world away
that we could evolve into a world where nobody would have to mourn for strangers.

[Instead of my usual “oh gosh that’s cool” appreciation of Sarah Doughty’s latest epigrammatic poem, I thought it would be neat to write a response.]

You are my beacon,
steady through my mind’s fiercest storms,
and without your love I am dumb,
a phone with no signal.

Let us dispense with the mourning of broken memories,
and revel in the anxious joy of a new day’s discoveries.

Her foot dangles off the bow of the canoe
and flicks lake water onto the gravelly shore.
For fifteen minutes
I’ve been watching her.

If the stars had any of the curiosity that terrified me that night
they would have wondered why this lad let his dungaree knees
soak in an April mud blackened with the memory of winter
as his friends danced in the warm gymnasium.

Like every night, he dozes uneasily in his recliner,
glasses slipping down his nose.
At any sudden noise — setting my glass down on the table,
the front door opening, a shout from the sports announcer —
his eyes snap open, and he cries out, startled and afraid,
until he sees one of us, and we tell him everything’s fine,
encouraging him to go to bed for crissakes.
Some mornings he wakes up in that chair.

An envelope in my graduate school mail slot,
filled with the two twenties, a five, and three singles
I had left on the table the night before,
storming out of the bar in anger.
I needed a sign to renew my trust in them,
and was disappointed at their passing my narcissistic test.

Her responses were exactly opposite of mine,
eruptions of anger instead of simmering resentment.
We saw the flaws in each other,
and the love we shared allowed us to be each other’s healer.

I hope these young men have acquired
the strength and wisdom necessary
to overcome their fears
and forgive my role in their creation.

Two brown circles, each a quarter inch diameter, every night.
The supplement is half that size, and looked much cooler as a green capsule.
When I forget about not liking to ascend mountains, there’s one other.
For the past two years, I’ve said the same words to two licensed professionals,
but those words have lost no potency in their repetition.

We all become legacies.
But our stories are always changing.

Until my fingers bled,

Then looked for more time,

But the clock had fled.

a whining cur nips at a deaf heel,

while long shadows disappear into the night.

Where the twilight of hope gives way to the reluctant dawn
And tranquility is poisoned with fear,
A quickening stone clears the paralyzing dam
To cure the silent disease.

Victory is a mirage for both of us,
the manic schemer
and his somber doppelgänger.

But the game can’t be stopped
and the only way we know how to play
is to imagine an oasis that could sate
our thirsty ambition for winning.

The brash schemer believes his coming triumph
is the destiny unjustly denied to him,
and knows it will be the start
of a life-long winning streak.

His quiet foe is confident
of a devastating conquest,
draining his opponent of the desire
to continue trying.

The game continues,
momentum flowing to one side while ebbing from the other
before shifting like the tide,
balanced in indecision.

The game tires both combatants,
Yet neither is willing to concede.

Time has been wasted,
seeking comfort under leaking shingles
crafted out of fear.

Time passes,
screamed wordlessly by the invisible clock
hanging from the wall like mildew.

Time has come,
to escape from the hovel of necessity
and dance in the foolish rain.

Welcome to the Wood

Inspired by life, death and everything inbetween

Has a Mom from Indonesia (Taiwanese Aboriginal Descent), a Dad from America, and a Heart from Writing