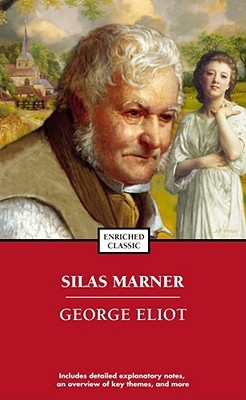 A first for me — an audiobook review inspired by a blog comment.

George Eliot’s 1861 novel reminded me a great deal of Dickens, but without the cloying sentimentality or excessive length that characterize much of the latter’s work. Set in early nineteenth century rural England, the tale’s title character is a working-class weaver forced by an unjust accusation into a life of miserly solitude. His fate intersects with the life of an upper-middle-class family desperate to hold on to its privilege. When a baby literally walks into his life (a Dickensian moment, the only part of the novel that seemed contrived), Marner experiences what his life could have been had he not been falsely accused and convicted as a young man.

This was a thoroughly enjoyable work (and thanks again to Dave Z’art for the recommendation).  Marner is not a hero by any definition, yet his simplicity and humility make him engaging. Eliot also conveys his condition without delving into pathos. The interaction between Marner and the family of Squire Cass seemed genuine; their attempts to communicate with each other are blocked by the awareness of their class difference. What I probably enjoyed most was the ending. Marner attempts to right the false accusation which had begun his time in solitude, and a more sentimental novelist would probably have given him this satisfaction. Eliot, however, uses this moment to make an ironic comment about the rise of the English middle class, and chooses to underscore the message Marner has learned in his journey: the wealth he has found in his unlikely family is far greater than the gold he’s lost along the way.

Andrew Sachs doesn’t interject a lot of personality in his audiobook performance, as his character voices don’t have a great deal of variety. Yet for a work as strong as this, it’s better for the narrator to stay out of the way.