I’ve had a pretty uneventful love life, a fact of which I am neither proud nor ashamed. It is what it was, and will continue being as it has been. Perhaps the simplicity of my experience is why I’m drawn to poetry about this vital part of human existence.

I post occasional movie reviews on this blog, though I write about far fewer movies than I actually see. That’s probably because most of the films I’ve seen lately have been pretty much the same. Disney shareholders love me these days.

The movies I’ve been so passionate about have been criticized, fairly harshly, by two prominent filmmakers. And while calling them “despicable” seems a bit much, there’s a part of me that agrees with the sentiment they are “not cinema.” Movies can be a powerful medium for revealing truths about our world, and while there’s nothing wrong with having a good time at the show (a concession I’d like to see from the genre’s critics), I definitely feel like I’m missing out on some quality filmmaking. So while there’s no way I’m missing the next Marvel or Star Wars flick, it’s definitely time to see what else the silver screen has to offer.

So here’s the challenge I’m setting for myself. For every superhero/sci-fi/action film I to to see in the coming year, I’ll also patronize a film that relies more on feeling than explosions. I have a feeling I’m going to enjoy this challenge.

Animals had scavenged the food left in the homes and apartments, and the more intelligent creatures had constructed dwellings from what had once been bedding and furniture. But in rooms containing nothing of interest to the city’s new residents, proof could be found of distinctly human activity. Framed wedding announcements hanging askew on a wall. A sound system preserved under plastic coverings. An abandoned sewing project.

Friday Fictioneers is a weekly flash fiction challenge. One photo, 100 words, and loads of fun.

The Jerusalem street was a residential and commercial mix, stores at ground level with apartments on each of the three floors above. Lighting for the street came from within the stores as well as sconces above their entrances, as well as an inventive array of circular lights of many different sizes suspended by wires strung between the second floors on both sides of the street. Resembling Hula Hoops, or perhaps large halos to the religiously inclined, the array hovered above the street like an artificial constellation, and gave this section of the ancient city a distinctly modern atmosphere.

Friday Fictioneers is a weekly flash fiction/photo prompt contest. I decided to use my 100 words (these italicized comments don’t count!) this time on a narrative description, a passage that could appear in a non-illustrated story or novel.

The always insightful Tony Single has a series of poems about religion’s often toxic effect on society. Read his latest poem here, and be sure to follow its embedded links.

On her blog, Andra Watkins is posting a dark tale about a reluctant mother. The central character is equally fascinating and appalling, and I appreciate any writer who can pull off that trick. Andra is releasing the story as a serial, and today is latest installment, with the next promised for this coming Monday. I’m suddenly inspired to start my own series… we’ll see what comes of that notion. 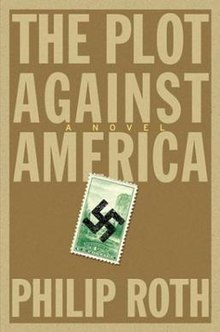 A national celebrity with no political experience wins the Republican nomination for President of the United States. Running against a Democrat with strong connections throughout Washington, the celebrity Republican’s candidacy is considered a long-shot at first. However, the Republication runs a populist “America First” campaign that taps into America’s distrust of career politicians, and eventually wins a decisive Electoral College victory. After taking office, the new president meets with tyrannical leaders of nations once hostile to the United States. Years later, information showing the president received assistance from one of those foreign dictatorships comes to light.

Perhaps the only time fiction is stranger than truth, is when a work of the imagination predicts the actual future.

In The Plot Against America, Philip Roth’s 2004 alternate history of America in the World War II era, famed aviator Charles Lindbergh defeats Franklin Roosevelt in 1940, and then signs agreements with Germany and Japan that keep the United States out of of the global conflict. I downloaded the audiobook (which features an outstanding performance by the late Ron Silver) because I have a fascination with this period of history, and enjoy fictive tales of how history could have turned out differently. I had no idea the book’s plot so eerily paralleled the rise to power of The Fraud, but the similarities cannot be ignored. (I should note that after the 2016 election and shortly before his death, the author denied making any attempt to comment on modern American politics.)

While Lindbergh’s election and subsequent actions are the primary events in the novel, most of the action centers around a fictionalized version of Roth’s family and other Jewish households in Newark, New Jersey. After taking office, Lindbergh establishes the Office of American Absorption, which temporarily relocates Jewish youth into Christian communities. It’s a thinly-veiled attempt to eliminate Judaism through cultural assimilation, and by showing how the campaign affects a single family, the devastating impact of the alternative history becomes very real.

The novel is riveting until it reaches its epilogue, which provides an implausible explanation which excuses Lindbergh’s behavior. This ending is a major disappointment, and its portrayal of Lindbergh is so inconsistent with the earlier part of the novel that I wonder if the author was pressured to write the epilogue. It’s hard to imagine a writer of Roth’s reputation would succumb to that pressure, but the epilogue definitely reads like a capitulation.

But in spite of this disappointment, the novel is a major success, and especially insightful for anyone seeking to understand how authoritarianism could come to power in the United States.

If there had ever been a business plan for the store, nobody knew where it existed now.

The only items for sale were black-and-white or sepia photographs from the previous century, gathered from yard sales and attics soon to be cleared out after an octogenarian death. None were considered worthy of a curator or collector’s attention.

After a few months of lackluster sales, a local independent newspaper gave the store a favorable review. This inspired a curiosity, one inspired by a digital-age longing for tangible assets. For images that can be held, rather than downloaded.

Sales have since been brisk.

If you like to write and/or read flash fiction, I highly recommend Friday Fictioneers.

For some reason I forgot to post my story to the Friday Fictioneer’s contest page. Here’s ten people who weren’t so absent-minded: