As the number of electric vehicles and other battery-operated machines increases, one significant question remains largely unanswered — what will happen to these batteries after they are no longer usable?

There’s general agreement that batteries, with their efficient yet toxic mix of minerals and chemicals, are not good candidates for landfills. Ideas are being pursued to re-use car batteries as stationary energy sources for charging stations and low-power devices such as street lights, but even optimistic estimates grant another decade or two of use for the batteries. Harvesting the battery components is certainly possible, although there is debate over the cost effectiveness of this process. In other words, by around 2030 there could be an enormous amount of batteries that will be neither usable nor disposal.

Or perhaps not. Industrialists, who tend to look at the profitability rather than environmental impacts of issues, see the income potential in the battery disposal/recycling market, if for no other reason than having plenty of material on hand. And while national governments in recent years have backed away from alternative energy investment, voters remain committed to the technology. My gut feeling is that within four or five years, innovative solutions will be developed to lessen, although not eliminate, the impact these dying batteries will have on the environment and the economy. This is one of the more significant technological challenges of our time, but I’m optimistic a solution will be found. 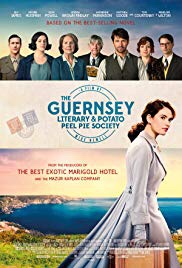 Call it the Principle of Uncommon Cognomen. If a book or movie (or in this case, both) has an unusual name, there can be no middle ground — it will either be as embarrassing as its title, or cool enough to justify its unique appellation.

Fortunately, The Guernsey Literary and Potato Peel Pie Society is a solid film. Based on a 2008 historical novel, the movie takes place during the 1940s on the island of Guernsey, located in the English Channel and occupied by Germany in the second world war. Juliet Ashton, a writer who achieved fame during the war, visits the island and its oddly named literary society in 1946 after being contacted by one of its members. Ashton learns the society served as a resistance to the Germans, and discovers a secret the society would rather not have her reveal.

The film works on a number of levels. As historical fiction, it sheds light on an obscure theater of World War II, and creates empathy for the island residents who chose not to evacuate in advance of the Germans. Ashton, adroitly played by Lily Adams, is an engaging character who functions well as the audience’s guide to Guernsey and its mysteries. She also struggles with her recent engagement, and while the audience can see the resolution to this storyline early in the second act, Adams is a strong enough actress to make this part of the film seem genuine.

The film was released in theaters in Great Britain, but evidently believing American audiences were adverse to characters speaking in British accents, it is only available on Netflix in the United States. That’s a shame, because the wide shots of the Guernsey coastline are best appreciated on a large silver screen. But even when restricted to the narrower width of your home television screen, “The Guernsey Literary and Potato Peel Pie Society” demonstrates that a film with the most unusual of titles can still be unusually good.