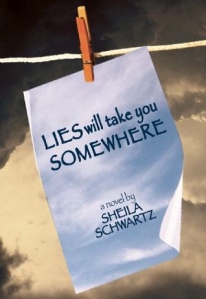 I am a lazy reader. I’d actually do fine by any quantitive measure of reading (words/pages/books read, time spent reading, rate), but it’s absurd to evaluate the activity by a productivity yardstick, like you would for running or splitting logs. Reading is better evaluated in qualitative measures, such as how well the reader constructs meaning from a text, and its in this regard that, for as much education I have and as much time I spend reading, I believe I fall short. I don’t want to work too hard when I read; I have no interest in figuring out the hidden meaning of a character’s name, I get irritated when a conversation becomes so obtuse that I can’t figure out who is speaking, and if a story can only be appreciated by someone with an extensive knowledge of some discipline (take your pick — medicine, military history, philosophy), I don’t see why I should bother with it.

And I really hate plot holes, and unresolved mysteries.

Which brings me to Lies Will Take You Somewhere, the only novel published by the late Sheila Schwartz. The language of this novel rises to the level of poetry at times, and I can understand why Schwartz won numerous awards for her short stories. Whether she’s describing a character’s mood, showing a physical action, setting a scene, or even telling a joke, Schwartz can evoke a powerful visual image through her words:

This place is what Saul calls a monoculture, which to Jane has always sounded like yogurt, but she knows what he means.

She gasps as he tugs himself out of her without warning — the thick rope of him flopped against her inner thigh.

… the glasses smudged like he breathed all over, and his breath never dried.

… the lava of his anger cooling to stone.

… books sprawled face down on the carpet as if thrown there and concussed, barely breathing, …

The central conflict of the novel — a troubled marriage made more complicated through layers of deceit woven by both husband and wife — is also compelling, and while the plot twists are perhaps overly dramatic, the characters respond in ways that are very believable, and quite moving. I agree with her husband, novelist Dan Chaon, in his review of the novel: “Her fiction walks this incredible thin line between hilarity and despair, between the absurd and the tragic, between detachment and compassion.”

Yes, I enjoyed this novel. I just wish it didn’t irritate me so much.

I can’t describe what bothers me without revealing major plot details, so if you don’t appreciate spoilers, now’s the time to check out. Early in the novel, the wife (Jane) flies down to Florida to take care of her late mother’s estate. While there, she discovers several oddities, one of the most significant being the disappearance of a piano treasured by Jane’s mother. Meanwhile, her husband (Saul) receives the latest in a series of cryptic letters by someone claiming to be his mother, who disappeared when Saul was a child. Saul also is told about an affair Jane had chosen to keep hidden from him, and calls her in anger; when Jane attempts to purchase a plane ticket to return to Philadelphia, she discovers all of her credit cards have been locked.

So far, so good; the foundation for a intriguing tale has been laid. But then Saul calls again, and demands Jane return home — which she can’t, because Saul has frozen her credit cards, by his own admission. Has Saul lost his mind, or is he tormenting her? His motivation never becomes clear. In addition, no explanation is provided for the piano’s disappearance, or for the letters from Saul’s “mother.” These major plot developments are left as mysteries.

Did the author provide hints that a reader more astute than I would have perceived? That’s a definite possibility, but again, I’m a lazy reader, and when an author presents me with a significant mystery, I want a resolution that’s equally prominent. More plausible, though, is that these ambiguities are a message from the author about life’s uncertainty. We don’t get all our questions answered in life, the author appears to be saying, so why should I provide them here? If that’s the author’s message, I find it dissatisfying. Fiction is not mimetic; we have different expectations as readers than we do when acting in the dramas of our reality. True, fiction is also not mere escapism, but the insights it provides us should be a little more compelling. Life’s uncertain, so fiction should be as well — that’s an OK sentiment if you’re an avant-garde artiste, but it doesn’t work well for a storyteller.

The above ruminations may just be the frustrated sentiments of a lazy reader; I’ve been called worse. That being said, I believe “Lies Will Take You Somewhere” suffers from clear technical flaws that distract from its obvious literary qualities.

One thought on “Review: Lies Will Take You Somewhere”