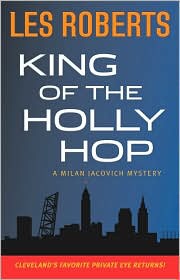 Some words of advice to all private investigators, especially the fictional ones: don’t go to any of your high school reunions, because if you do, somebody’s gonna get themselves killed.

Milan Jacovich arrives at his class’ 40th, and one of his fellow alumni has a drink thrown in his face, walks out to his car, and catches a bullet with his noggin. Advice for reunion attendees: if a private eye shows up, don’t wander off by yourself. Especially if you’re carrying emotional baggage from your high school years.

Hired by the lead suspect in the case to clear his name, Milan interviews many of his classmates, and discovers some ugly scar tissue over adolescent wounds. The lead suspect, for one, had been humiliated during the Holly Hop, a school dance held just before Christmas his senior year; he confronts the cause of his embarrassment at the reunion, and when that man winds up dead minutes later, suspicion rightly falls on him.

“King of the Holly Hop” falls within a series of Milan Jacovich mystery novels written by Les Roberts. I haven’t read any other books in the series, but I didn’t feel at a disadvantage for entering this series without a previous introduction. There isn’t as much action as you’d find in most other mysteries, but Roberts’ characters are complex and engaging. If you like the mystery/crime genre, you’ll appreciate this novel’s craftsmanship, and if you’re just looking for an entertaining read, you’ll find more than enough satisfaction.