The United States is enjoying a long period of economic prosperity. Of course, that means we’re due for a “market correction,” a wonderful phrase, implying that too much prosperity is a problem that must be avoided.

Nobody knows when economic trouble will arrive or from where it will originate, but we can use the benefit of hindsight to examine recent financial crises in our nation, with the hope of being better prepared for whatever panic comes next. I’ve recently read two insightful books on this subject. 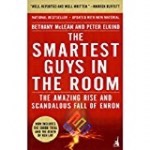 Bethany McLean and Peter Elkind’s “The Smartest Guys in the Room” is about the collapse of Enron in 2002, due in part to the collapse of the Internet bubble in stock prices. It provides extensive and at times overbearing analysis of the company’s deceitful financial practices, which landed several of its executive in jail. Some of the many lessons you can take from this book are to beware of companies that extend into areas where they have little to no expertise (one of Enron’s many problems was the curious decision of the energy company to launch an online entertainment division), that boast about their stock price like a cocktail party boar, and whose financial reports are deliberately obscure. After Enron’s collapse, some fairly weak regulations on financial disclosures were passed, but we’re now in the process of undoing even these safeguards. When it comes to bankruptcies that rival those of Enron or Worldcomm, the question is not if, but when. 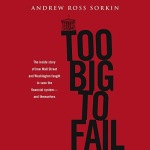 Andrew Ross Sorkin’s “Too Big to Fail” is about the near collapse of the financial system in fall 2008. Unlike the Enron book, there is little attention paid here to the causes of crisis — this time, it was the mortgage bubble that burst — and instead focuses on the effort to mitigate the disaster’s impact. If you believe Hank Paulson, Ben Bernanke, and Timothy Geitner don’t deserve enough credit for their efforts, and believe Dick Fuld was treated unfairly, you’ll definitely enjoy this book. The book depicts a global financial system that is both complex and frighteningly fragile, susceptible to collapse from multiple points, yet also shows a United States government with overwhelming power to influence private markets. Americans take pride in our capitalism, but when faced with financial catastrophe, we’re not afraid of a healthy dose of socialism.

Of the two works, “The Smartest Guys in the Room” is the more engaging read despite its often weighty prose, while “Too Big to Fail” moves at a brisker pace, as it covers a much shorter period of time. Reading both may hlep make the next economic crisis seem less shocking.