Double-J shouldered his way to the front of the group. “Finally,” he said with mocking excitement, looking at Butch, “someone shorter than me!” A collective laugh erupted from the team. “Interested in sabre, my friend?” Double-J continued, his sword arm extended. “Fencers of our stature have an advantage in sabre.”

Butch raised his eyebrows and opened his mouth slowly. The Coach raised a hand in Double-J’s direction. “Let’s stick with foil at the start,” he said, then turned to Butch. “You need to learn the basics first — footwork, point control, right of way rules, that sort of thing. Just show up at our next practice — Tuesday at 4?” Butch nodded.

The Coach grinned broadly, and stepped toward Butch, extending a hand and saying his name. “You just call me Coach. Show respect for the sport, and your teammates, and you’ll always have my support. Welcome to the team.”

(This review was written in May 2009 for the Greater Cleveland PC Users Group newsletter.) 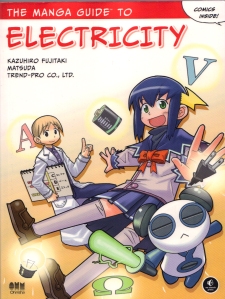 Books that aim to be both educational and fun often fail to reach one of these goals by trying too hard to attain the other. In other words, they’re usually either text-heavy snoozefests or lightweight fluff. Fortunately, The Manga Guide to Electricity is an exception to this rule. Striking a healthy balance between instruction and entertainment, it is a perfect introductory guide for young readers with an interest in graphic literature – comics, if you will – and a curiosity about electricity.

Most of the book is composed of cartoons drawn in the Japanese style of manga. All of the familiar characteristics of manga – faces exploding from the panel in excitement and surprise, abrupt changes in tone, a fascination with exotic foods and clothing – are employed to tell the story of Rereko, a teenaged girl from the world of Electopia. Seems Rereko’s been neglecting her studies of late, so her teacher orders Rereko to surrender her summer vacation and spend time on our world studying the basics of electricity. Upon her arrival Rereko meets Hikaru, an electrical engineering professor with a kind heart and a messy apartment. Hikaru’s patience and clean-cut appearance contrast nicely with Rereko’s outlandish personality and clothing.

Assisted with a series of illustrations and an odd little robot named Yonosuke, Hikaru walks Rereko through the basics of electricity – voltage, current, resistance, circuits, valence electrons, magnetic fields, generators, turbines, capacitors, diodes, semiconductors. Each lesson is followed by a section of traditional text that explains the preceding chapter’s concepts in more detail. And make no mistake – this is a serious, weighty work of technical writing. Acting as the reader’s surrogate, Rereko openly and frequently expresses her confusion and curiosity, to which Hikaru responds with an unfailing patience that invites Rereko’s, and the reader’s, participation.

It’s doubtful the work could stand alone as a work of manga — the artwork is like good wallpaper, noticeable but not memorable. Yet Rereko and Hikaru’s growing relationship provides a storyline strong enough to hold the reader’s interest through even the most complex technical passage. As an introductory guide to electricity, The Manga Guide to Electricity works very well.

New post on my LUVVITT tech blog, where I list some interesting articles about a little web site of which you may have heard.

Cynicism is a substitute teacher for intelligence.

His anger and anxiety were the junk food that fed his insecurity. He had little problem not indulging this appetitie, but once he tasted those feelings, he could not help but gourge himself.

He celebrated with the reserved joy of a man too keenly aware of his good fortune’s brevity.

But even as angry as he was, determined to hold on to his anger, to use it as a source of energy — he knew his anger wouldn’t last, would burn itself out and a brighter mood would emerge from the smoldering embers of his wrath. He hated himself for knowing he couldn’t maintain this feeling, and that hatred briefly burned his anger hotter. Yet he knew it was all in vain.

“You know what’s the problem with kiwi? The skin — it’s rough, ugly, a pain in the ass to peel, and if you leave some on and accidentally eat some, it tastes pretty nasty. The fruit, now that’s pretty fantastic, and it’s worth the effort. But you’re not one to put in that effort, are you? You’ll eat kiwi if it’s already peeled, but not if it’s you that has to deal with the skin. And that’s how you look on life in general, isn’t it? If something inconveniences you in the least, you act as if you’ve been condemned to peel kiwi skin. Why not approach the task with some type of anticipation — enjoy the act of peeling the skin, knowing that you’ll get to enjoy the fruit within. That’s the problem with seeing life in your absolute terms. If you don’t get immediate pleasure from what you’re doing, you lose interest. All I’m saying is try something different. You say you’re not happy, life hasn’t worked out for you — take a different approach, and see what happens.”

The team recognized the voice that offered the greeting, as he was notorious for being easily the shortest student in the school. He waved at the team with a nervous smile. A girl stood next to him, although it was clear from their body language that she wasn’t with him — or even, it seemed, conscious of anyone in particular. Her eyes were pointed in the direction of the team, yet seemed to be focused on a point several feet beyond them.

The boy, wearing blue jeans with a white t-shirt under an unzipped hooded sweatshirt with long ties dangling from the neck, spoke again. “I was wondering,” he said, passing his right hand flat over the top  of his head” if  there was a height requirement for being on the team?”

“Butch!” cried Bernie, walking forward from the team and extending his hand. “I was wondering if you’d ever take me up on my invitation.” Bernie was smiling broadly, happy for the first time that day that his best friend from his earliest school days was joining the team.

“Actually,” said the Coach, also stepping forward, “those of your stature have a distinct advantage in a fencing bout — if you know what you’re doing,” he said with a wink.

A couple years ago I finally read Ulysses, and posted this review on a blog I had started and would soon abandon.

Took advantage of several long flights over the past few months and accomplished an unfinished task from graduate school — I read all 642 unabridged pages of James Joyce’s Ulysses.

A customary thought upon completing any book is whether or not you’d recommend it to a friend. After finishing Ulysses, I’m left thinking that I’d only recommend it to someone who really wanted to read Ulysses. It’s not a “just give it a try” kind of book, or one you can put down in mid-chapter and easily pick up where you left off. Although it has an easily identifiable day-in-the-life plot, the author’s unconventional punctuation (quotation marks are rarely used, making it hard at times to see the line between character statements and narration) and imagistic use of language — Joyce tries not so much to describe a setting through his characters but to convey that character’s impression of that setting — make Ulysses a far different read than most of us are accustomed. It is a book that you don’t so much read but rather experience, and that experience is best captured by reading each of its eighteen chapters (or episodes, as they are often called) during one setting. The first several episodes can be completed in about an hour each, but latter episodes can take several hours — and, it bears repetition, each episode is best experienced in its entirety, without interruption, at one setting. It is a novel that you have to want to read, and while I couldn’t recommend it to anyone just looking for a good read, I would recommend it to anyone who enjoyed a literary challenge.

An aid I employed in reading Ulysses, one which I would highly recommend to anyone considering reading (or re-reading) the novel, is the Naxos Audiobooks recording of the novel. Combining some frequent buyer credits and a sale from Audible.com, I was able to download the complete unabridged recording (over 27 hours! As I said, this is a novel that takes a commitment) last year at a reasonable price. The purchase was inspired by a Shakespearean professor from college, who recommended listening to performances of the plays while reading. Our university had a very good listening library that contained each of Shakespeare’s plays, and I found that listening to professional actors brought nuances of meaning to the text that I had no hope of capturing on my own. Knowing that Joyce would present an even greater linguistic challenge, I decided that an audible aid was again appropriate. And I am happy for my decision, as the reading by Jim Norton (who provides a specially good performance at the end of episode 17) and Marcella Riordan (whose major task is reading the final episode, Molly Bloom’s eight-sentence, two-hour plus soliloquy) made the experience of this fantastic and overwhelming novel far more enjoyable and accessible.

One final observation, of which I am not entirely proud — my curiosity regarding the novel actually began in my childhood while listening to the gleefully drivelistic song “Hello Muddah, Hello Fadduh”. In his sorrowful letter to his parents, Alan Sherman’s unhappy summer camper lists among his many misfortunes that “the head coach wants no sissies, so he reads to us from something called Ulysses.” As children should, I asked my parents what was meant by this line, and while they did explain the novel had a reputation for being difficult and obscene (it was banned in the US between 1921 and 1933, though it is, not surprisingly, tame by today’s standards), the hesistance I heard in their answer made clear that they had said all they wanted to say on the subject and that now was a really good time for me to go watch “Batman.” Their explanation left me only slight less confused, and while I now imagine the reference was Sherman’s attempt to tweak the Puritanical literary attitudes of his audience in 1963, after finally having read Ulysses, the line seems even more out of place to me now than it did back then.